The Halloween franchise is one of the most oft-viewed of the classic slasher series. Every October, it only feels right to dust the films off and do an annual re-watch of films that I’ve seen so many times. While the films have been retconned twice at this point (originally with Halloween: H20 pretending that the films 4-6 simply don’t exist, and again with Halloween (2018) ignoring all but the first entry), the middle films often become overlooked. While I obviously love the Jamie Lee Curtis films the most, because Laurie Strode is the driving force behind the franchise for me, I also have some of the most fun watching these controversial entries.

John Carpenter’s Halloween is an undisputed horror masterpiece. There’s a reason that it has gone on to become the phenomenon that it has. With hardly any money at all, Carpenter was able to construct a timeless tale of terror that truly stands the test of time. The task of following that up with a number of sequels is a seemingly impossible one. None of the ten films that have followed have been able to live up to the stunning original. That’s not to say that I don’t love them. Because I truly do. This is my favorite of the horror franchises. Every year it’s like a comfortable visit with friends when you visit these strange characters. Also, I truly love the direction of the new trilogy of films produced by Blumhouse with Jamie Lee Curtis returning to her iconic final girl role. It is honestly the first time that Michael Myers has legitimately felt like original Michael to me.

With this month’s slated Halloween Kills being pushed back to next October, now is the perfect time to revisit these films and reacquaint yourself with why they are so loved and so much fun. Halloween 5: The Revenge of Michael Myers along with its sequel (Halloween: The Curse of Michael Myers) are often viewed as the weak links in the Halloween chain. It should be obvious to fans that Halloween: Resurrection is the true disaster here, so why punish these earlier films so harshly? Also, I’m one of the folks who legitimately hates the Rob Zombie directed remake duo, so I won’t be acknowledging them here.

Let’s get to the real focus: Halloween 5: The Revenge of Michael Myers. Released on October 13th 1989, it would prove to be the weakest performing of the franchise at that point in time, and would go on to even be out-performed by Halloween 6. Directed by Swiss/French director Dominique Othenin-Girard, the film had a troubled production due to many script issues and being forced into production without a final draft. Anyone who has seen the new Fantastic Four remake, Star Wars’ Solo origin film, and more, knows that studio interference and lack of faith in the filmmaker rarely results in a polished and flawless product. Many fans are quick to admit that Halloween 5 is clearly not their favorite, especially with how it disregards the successful storyline of its predecessor. Othenin-Girard’s film chose to tread new ground and break away from the mold a bit.

In one of the documentaries that focus on the making of this particular film, multiple members of the cast and crew of the film speak about how the director’s European film style makes its way into the film. And when looking at it, narratively you can see how the film steps away from the traditional mold of the 80s slasher film. We see the final girl from Halloween 4: The Return of Michael Myers, Rachel Carruthers (Ellie Cornell) killed incredibly early in this film to be replaced by her friend Tina Williams (Wendy Foxworth). This was a controversial choice as fans really connected with the Rachel character and were rooting for her and her adopted sister Jamie (Danielle Harris), the daughter of Laurie Strode and niece of Michael Myers. But instead of simply focusing on Tina, Halloween 5 is really Jamie’s story and she becomes the final girl while battling her evil uncle.

Of the cliques of Halloween franchise teen victims, I truly feel that this bunch is the most enjoyable, second only to Laurie and her original friends. Are they the best actors of the series? Probably not. Are they given strong character arcs? No, with the exception of Tina. Many franchise fans brush Wendy Foxworth’s Tina off as simply another annoying victim of Michael’s. I think that is unfair and doesn’t give the character the respect she deserves. Yes, she blurts out odd dialogue on occasion that is definitely not the best. Yes, she has bad taste in boyfriends. But what Halloween character doesn’t? Of all of Michael’s victims, Tina is given a really odd and parental role in this film. With the absence of Rachel, Tina becomes the primary caregiver of Jamie, who is still mute and traumatized from her encounter with Michael in the previous film. 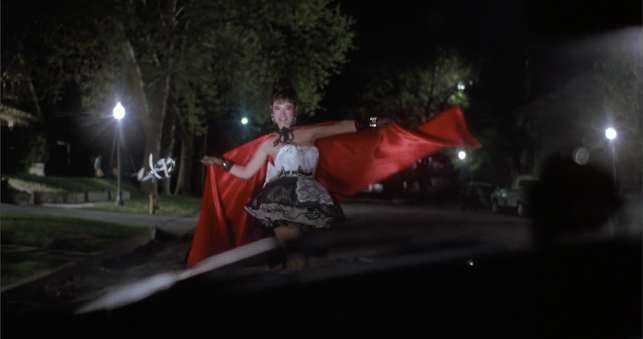 In a world of sex-obsessed characters, Tina cares more about Jamie than physical intimacy with her boyfriend Mikey, a car-obsessed jackass. Through Jamie’s odd psychological connection with her uncle, she is able to see that Tina is in danger after he has killed her boyfriend. Myers dons the mask that Tina bought for Mikey and drives his car to pick her up. This is honestly one of the creepier scenes in this part of the franchise. Michael is wearing a particularly creepy mask in the driver’s seat of the car and adds to the tension by tightly gripping the steering wheel and shooting creepy looks to Tina. Eventually the sound of Michael’s gloves on the steering wheel and a side-glance seem to warn Tina that something isn’t right. She states that she wants to stop at the gas station. This action, along with Jamie sensing where the car is, saves Tina’s life. While many fans brush Tina off as a stupid character, I think this moment proves that she is definitely more capable than some of her counterparts. There are multiple moments in the film where we see Tina sensing that something isn’t right. She feels Michael’s eyes on her when he is watching her leave Rachel’s house at the beginning of the film. She knows something is wrong in the barn at the farm party before discovering the dead bodies of her friends. To that end, however, she does foolishly decide to leave Jamie and go to the farm party, though. So, there are definitely limits here. However, I maintain that she exhibits more thought than the majority of Michael’s victims throughout the franchise.

Another point of contention with the fans of the franchise is the buffoonish cops that are entrusted with protecting the city of Haddonfield in this film. They are definitely two of the most incapable law enforcement agents in film that I can think of. Not only do they continually just toss unfunny jokes and remarks back and forth, but they are also accompanied with literal honking horn and whistle sound effects. This is something that I just find incredibly funny because of how severely unfunny it is. Say what you will, but I feel like it only adds to the entertaining vibes that this film delivers.

Is it scary? Absolutely not. Does it attempt to expand on the mythology of the franchise of the fourth film? Definitely not. But what it does do is give us a film where you can clearly tell the cast was having a really fun time making it. And the real-life relationships between the actors really come across in the film. Is it messy? Obviously. But that does not mean it is lacking any merit. We have another great and increasingly deranged performance from veteran Donald Pleasance as Dr. Loomis, a strong performance by Danielle Harris who is forced to express emotions without any words for the majority of the film, and a respectable replacement for Rachel in Tina, who literally and willingly gives her life to save Jamie. Also, it would be a shame to not mention Jamie’s awkward friend Billy who likes cookies and somehow can understand her non-sign language gestures.

Halloween 5: The Revenge of Michael Myers is a hot mess of a film. Narratively, it is all over the place. It strays from the format of the 80s slasher. It drifts off in random tangents at times. It removes the voice of the main character. There are so many questions raised, like did Michael really live in the hut with that homeless guy for a whole year and then just kill him after being fed and taken care of for that lengthy period of time? Even for Michael, that’s pretty harsh. In spite of (and because of) the craziness, the film stands out as one of the franchise’s fun entries. The mask looks better than in 4, Michael wields a scythe for a bit, Loomis loses more of his mind, Tina dances a lot, and Jamie and Billy have countless awkward moments with each other. All in all, Halloween 5, a film that I used to brush off as a weak entry in my favorite franchise, has become one that I truly enjoy watching, even more so than 4.

It’s time to forget about petty reasons for hating on this film. Is it great? No. But is it just a fun watch? Absolutely. And it’s one of the highlights of the franchise re-watch for me. So, instead of skipping over these middle entries in the franchise, I challenge you to really give them a go. You know what you’re in for. And they really help set the mood for fall and for Halloween in general. 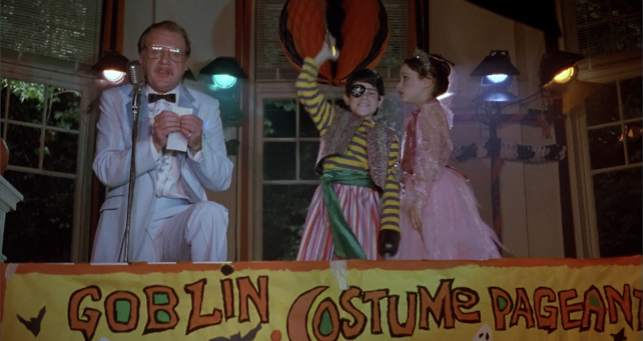 Until next time, folks!

One thought on “Revisiting the Cookie Woman: A Case For Halloween 5- The Revenge of Michael Myers”